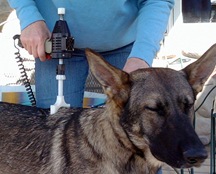 In 2004 when Teddy had a Femoral Head Osteotomy I was introduced to a healing technology by my veterinarian called VOM.  A practitioner would come to Great Lakes Vet and over the years all of my dogs have had treatments.  (all meaning Teddy, Ari, Olivia, Tori, Kobie, Brita and now Jake)  Veterinary Orthopedic Manipulation was developed by William Inman in the 1980s and 1990s and uses devices I have yet to understand much less explain to others.  Thus the reason for this post!  When I would tell people about the treatment it went something like this… 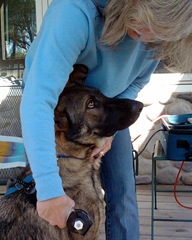 I met Nancy Selgrad at a Schutzhund trial in 2008 and saw that she was doing the same treatment as what I had done on my dogs in the past.  After Jake had his surgery I decided to call her for an appointment and this last time with her permission taped some of treatment and took some pictures with my phone.

So off we went to Rosendale.  It was a beautiful day and we were able to do the treatment on her front porch as we had during the summer. On the way to the house, Jake had to say hello to the horses and check out the cat he was introduced to on a previous visit.  I think you can see by the photos how content he is having Nancy work on him.  It was 6 months after his surgery and due to a growth spurt he was starting to sit and walk crooked.  After a few VOM treatments and some stretching at home his back has straightened and he sits straight again.

Would I recommend this treatment?  Of course!  I wouldn't be writing this if I didn't!   Is Nancy the best?  Well again, would I be writing this if I didn't think she wasn't?  She has a gentleness with animals and more than a physical connection. As she worked on Jake I could see that he was communicating mentally with her.  Our dogs communicate with us all the time but it's the rare person who actually listens.  Nancy listens.

Click here to see a slide show of the pictures I took during the visit.

Here is a short video of the treatment with some explanation.

For more about Jake and the rest of Laurel's Dogs please click here to visit their website.